John Bergman and his brother, Ben, began milling the kauri tree, which can live for 2000 years, in the Bay of Islands’ remote hills in the 1980s.

Mahoe Sawmills started manufacturing portable sawmills in 1991. The business soon took off, with sales as far away as Siberia.

John and Ben still build the Mahoe range in their Kerikeri factory, where their products have always been easy to use while producing the best possible result. 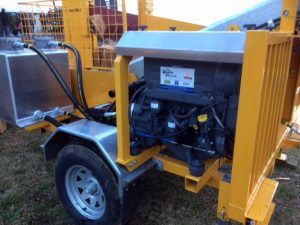 Three years ago, they developed the Whoppa Choppa firewood processor. Sawmills New Zealand had always liked the DEUTZ motor, but thought it was too expensive.

Mahoe’s Stephanie Bergman says there was no looking back. “All sales of the Whoppa Choppa firewood processor have now been ordered with the DEUTZ,” she says.

“The DEUTZ diesel motor was chosen firstly because it is a well-regarded quality motor, the Rolls Royce of industrial engines.

“It fitted on nicely, with really good power to the cutting blade. The oil cooled engine was also a deciding factor.”

New customers now choose to pay extra for the DEUTZ engine. Some previous owners have traded up their old engines.

Stephanie says the company has built a great relationship with DEUTZ through Blueprint Diesel. “They have been very good to work with, keeping us informed of motor availability for future orders,” she says.