Above image: Shaun and Suzanne Andersen (right) with their team.

Run by Shaun and Suzanne Andersen, the Goondiwindi business began in 2000 when Shaun’s employer sold up and Suzanne left the finance industry.

It repairs and rebuilds truck and tractor engines of all sizes. 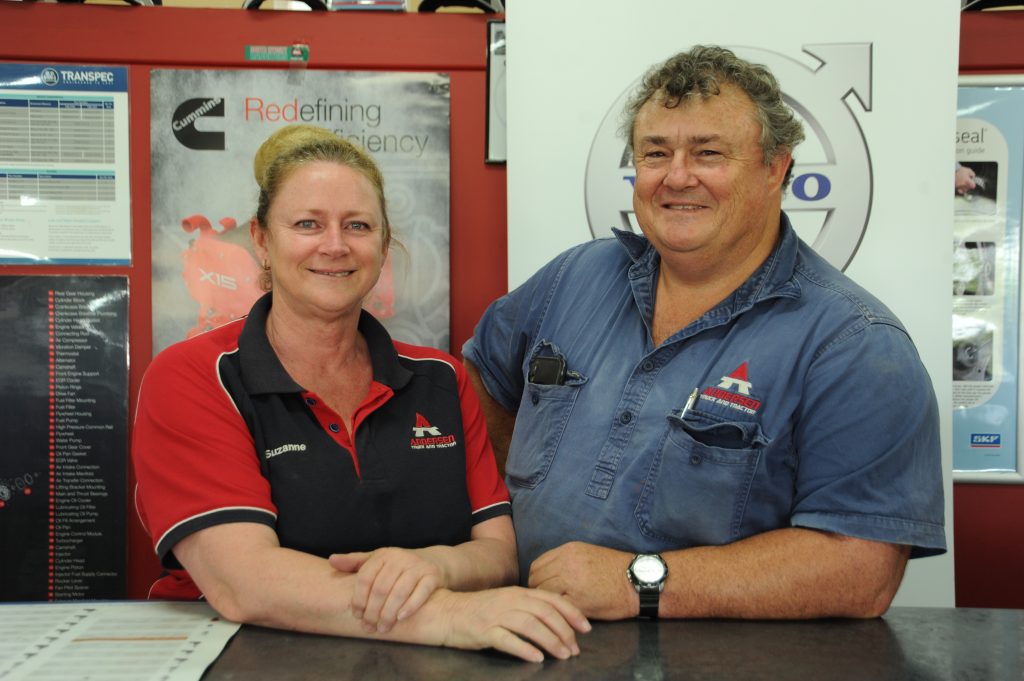 But Shaun was a respected local fitter and the couple’s determination saw their small clientele grow. They have also survived many years of drought.

“We have basically only had one good season in the 20-year period, so it’s been pretty tough,” says Shaun, who is Dealer Principal.

“We started with just one apprentice; now we have ten full time staff – admin, workshop and spare parts.

“Our customers know that they can rely on us in any situation, and they know we provide them with prompt and efficient service.”

Retaining good staff has been a challenge, particularly during the mining boom, but the business has always attracted quality operators.

“He already has a wealth of knowledge from growing up in the industry,” says Suzanne, who is Operations Manager. “He is certainly a huge asset to us.”

The business became a DEUTZ dealer in January 2012 and has supplied engines and spare parts state-wide, including Weipa.

Shaun and Suzanne love travelling, so dealer meetings in countries such as Germany and Vietnam are always a treat. They also enjoy being part of the DEUTZ family.

“They’re all good to me,” Shaun says. “They know I’m under the pump, so they help with things like quotes.”

The business is well placed but everyone needs more rain, which would also help the Andersens’ 1500-acre cattle farm.

“A number of similar businesses in the local area have reduced staff hours, and reduced staff numbers, but so far we are OK,” Suzanne says.

Cady is now a journalist with two children and Isabella researches cystic fibrosis in Brisbane at the Queensland Centre for Children’s Health Research.

Tom, a qualified diesel fitter, loves old Holdens and recently bought another FC ute to add to his collection.

Over the next few years, Suzanne and Shaun hope to see the drought end and travel more. Winning the Lotto would also be nice!

“Hopefully it will have rained to bring our farming community back to its full potential, and then the business with flow from there,” Suzanne says.